My work is loving the world.
Here the sunflowers, there the hummingbird—
equal seekers of sweetness.
Here the quickening yeast; there the blue plums.
Here the clam deep in the speckled sand.

Are my boots old? Is my coat torn?
Am I no longer young, and still half-perfect? Let me
keep my mind on what matters,
which is my work,

which is mostly standing still and learning to be
astonished.
The phoebe, the delphinium.
The sheep in the pasture, and the pasture.
Which is mostly rejoicing, since all the ingredients are here,

which is gratitude, to be given a mind and a heart
and these body-clothes,
a mouth with which to give shouts of joy
to the moth and the wren, to the sleepy dug-up clam,
telling them all, over and over, how it is
that we live forever.

In whatever sense she meant that last line, perhaps not even Mary Oliver would be thinking now that we live forever – not even as a species ... not even, perhaps, the planet as a whole. (She left us before the fires in Australia last year, or the plague throughout the whole world this year.)

And yet, I doubt she was referring to physical mortality; but rather, perhaps, an experience of the ineffable.

In any case, it's been a long April – for some of us gamely producing a poem a day, and for all of us dealing with the strange new reality we inhabit of lockdowns and compulsive hand-washing, sudden loss of income for many, and the horrifying numbers of the sick and dead.

I won't dwell more on the facts of the pandemic; we all know them too well by now. And those of us who have been responding to poetry prompts this April (applause, applause! take a bow) have oftentimes touched on aspects of the pandemic. How could we not? Though some, at least some of the time, have turned to more positive subject matter as a counter-balance; often the beauty and soothing powers of nature.

I thought we could all use a little more of that at this point. For me, no-one does it better than Mary Oliver. I well remember coming across her book, House of Light in a library in 1993, my first discovery of her work. I was completely enraptured, indeed amazed. I have had no cause to respond any differently since. She never disappoints. She always uplifts.

She did her work well, of loving the world. And she wrote of it for us, so that we can do it too. The world has not been entirely devastated yet; even the human race has not been annihilated yet, nor succeeded in destroying everything else. There are still plums, in the right season; there are still hummingbirds somewhere, and sunflowers, and clams. If I stay alive long enough, I'll know a few more years of them, and of moths, pastures, etc.

Just for now, after this long and often frightening April, I invite you to stop, take a moment, and let the late Mary Oliver (who will live as long as there are readers) remind you how to love the world while it exists and we are here in it.

As she said memorably in another poem ('The Summer Day'):

'I do know how to pay attention ...
which is what I have been doing all day.
Tell me, what else should I have done?'

and (say it with me)

'Tell me, what is it you plan to do
with your one wild and precious life?' 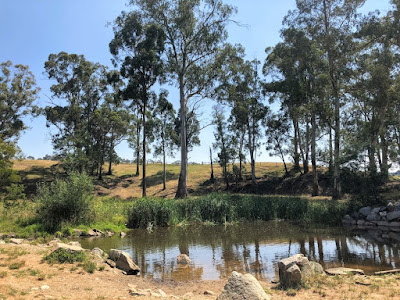 Photo © Rosemary Nissen-Wade 2019. (I've posted pictures of Mary herself at other times I've featured her. I thought this post called for an image of the natural world. I hope it doesn't matter that this is the Australian rather than the American outdoors.)