Wild Fridays #20: Words from Our Community

Bringing Up the Rear
(the ones we’ve missed)

When the team realised that those who subscribe by email to Poets and Storytellers United might not be receiving the emails until several days after the posts going live, it hit us that this didn’t leave a lot of time for those people to respond to prompts – not when the links were closing before the next post opened. Therefore we extended the linking time for every prompt to one week.

We do, however, add the warning that people who post late might not get a lot of readers. And in practice this is often true. Who’s got time to keep checking back in case any late-comers have responded to a prompt (let alone doing so for every prompt)? Well, me, that’s who – because, as Coordinator here, I feel a responsibility to look after all participants. Luckily I enjoy reading the wonderful variety of material shared – and I’m my own boss, so I can juggle my time, which not everyone can do. But I’m only one person.

I’m the one person who sees when late-comers are read by only three or four people at most; sometimes by none (until I get there). I’m the one who often thinks, ‘Oh, what a pity! This deserves more attention.’ I find myself feeling sorry, not only for those whose words have been seen by so few, but also for everyone who has missed out on a reading treat.

So here are a few tail-enders which you might not have seen: hopefully, something for every taste – the beautiful, the amusing, the deep; the detailed, the succinct; those which inspire further thought, those which invite contemplation, those which directly engage the feelings…

(Some did have a number of readers, just not many from this community.)

alas, my trust in you surpasses all rumours
including the ones which are true

(You might know this poet better as  Amrit Sinha, self-described as 'Reader. Writer. Book Reviewer. Guitarist. IT' who blogs at Green Speck.)

so tomorrow we will go back to the office.

there still too much there
so much to experience, to feel
that we block out even more
shrink those planes to a line
or two (of coke? poetry?)
right wrong
black white
left right
red pill blue pill
choose the parameters just right
and decision becomes easy, obvious

we make machines that help unravel the weaving
navi to reduce all roads to the one we need
music to cover the wall of sounds assaulting
beating on the ear drums
tv to numb and provide perfected thoughts
social media to reinforce what i think i know
(rather, what i got from the show)

and yet there are woods and streams beyond the city
)there is always a forbidden forest near the castle(
roads beyond my current route
and up there, space.

rockets demonstrate the longing
kitchen cabinets and walk-in closets too.
in open floorplans, in every successful sales pitch,
there are signs. (like this one)

(aka Eric Erb. See the blog post here, where he also tells us the poem was 'partially inspired by' this very interesting article). 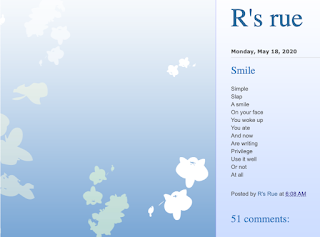 Under the couch
is a veritable treasure
trove of lost–or purposely
hidden–objects. I reach
underneath to retrieve
a paper clip. My hand
comes out clutching a pen,
plastic cap, earring
hook, and a vitamin pill.
I can make no sense
of some of these items,
but a certain dog sheepishly
looks the other way.

Freshly turned earth has a pungent
fragrance that takes me back
to my mother’s garden, which she tended
at the blush of day when the roosters
were announcing sun-up, and the dew clung
to the flowers before the sun burned
it away.

The smell of the rich, black earth
takes me also to the fields surrounding
home.  I close my eyes and see
my father, tall and strong in his overalls,
looking at me with love and a
chuckle as he takes me onto his lap
and lets me steer the tractor
toward home and suppertime.
***************

child of the prairie
unaware of world troubles
blessed with innocence

(A beautiful example of enjambment, for a recent prompt from Sanaa, by Beverley Crawford, blogging at Worditude).


A couple of these posters aren’t regulars here, and have not reappeared. Did they try us out hopefully, only to become discouraged by the lack of response? Perhaps they’re simply not prolific, and will be back eventually. (I’m sure Bev and Sarah, who are very much regulars, would have taken it in their stride  – but I still thought their poems so delightful in their different ways that I didn't want anyone to miss seeing them.)

Meanwhile, here’s another chance, not only to read but to go and leave a comment – if you’ve got a minute and you like what you’ve read. The links I’ve given will take you to the specific posts.


Material shared here is presented for study and review. Poems, photos, and other writings and images remain the property of the copyright owners, usually the authors.
Posted by Rosemary Nissen-Wade at 12:30 AM