In a Time of Peace

Inhabitant of earth for fortysomething years I once found myself in a peaceful country. I watch neighbors open
their phones to watch a cop demanding a man’s driver’s license. When a man reaches for his wallet, the cop shoots. Into the car window. Shoots.
It is a peaceful country.
We pocket our phones and go. To the dentist, to pick up the kids from school, to buy shampoo and basil.
Ours is a country in which a boy shot by police lies on the pavement for hours.
We see in his open mouth the nakedness of the whole nation.
We watch. Watch others watch.
The body of a boy lies on the pavement exactly like the body of a boy—
It is a peaceful country.
And it clips our citizens’ bodies effortlessly, the way the President’s wife trims her toenails.
All of us still have to do the hard work of dentist appointments, of remembering to make a summer salad: basil, tomatoes, it is a joy, tomatoes, add a little salt.
This is a time of peace.
I do not hear gunshots, but watch birds splash over the back yards of the suburbs. How bright is the sky as the avenue spins on its axis. How bright is the sky (forgive me) how bright.

During a recent conversation I had with another poet, he mentioned that he was reading Kaminsky's Deaf Republic, published a year ago. That was exciting to hear. I once met Kaminsky, when we were both featured readers at the Austin International Poetry Festival, Texas, in 2006 (but he was a much bigger star than me). I got an autographed copy of his prize-winning first book, Dancing in Odessa. Excuse me for skiting, but look! 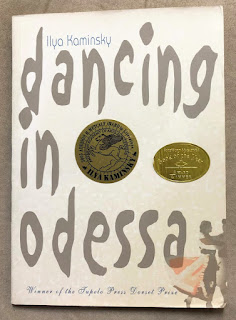 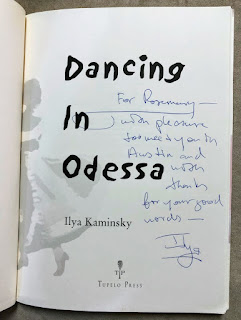 So of course I hunted up Deaf Republic, which is only his second book – though he's been busy in the meantime with translations, editing anthologies, and academic life.

'You can find some of the Deaf Republic poems at Poetry Foundation,' said my friend. And so I did, and others too. Here's the link. The poem I've shared with you I found in a New Yorker article published shortly before the release of the book. The book tells a story that the author describes as 'a fable'. The article brilliantly excerpts the book and includes illustrations from it, of hands making signs.

Kaminsky himself (born in 1977) has been deaf from early childhood. Poetry Foundation gives us the following bio:

Poet Ilya Kaminsky was born in the former Soviet Union city of Odessa. He lost most of his hearing at the age of four after a doctor misdiagnosed mumps as a cold, and his family was granted political asylum by the United States in 1993, settling in Rochester, New York. After his father’s death in 1994, Kaminsky began to write poems in English. He explained in an interview with the Adirondack Review, “I chose English because no one in my family or friends knew it—no one I spoke to could read what I wrote. I myself did not know the language. It was a parallel reality, an insanely beautiful freedom. It still is.”

When I met him he seemed a shy, intense young man. I've now found a YouTube reading that includes some of the Deaf Republic poems (apparently in earlier versions). He appears much more relaxed and confident these days, but his unique way of reading hasn't changed: startlingly declamatory and sing-song. He is asked about it at the end of the session and explains that, in order not to be bored by reading the same material over and over, he tries to make it as if he's writing the poem anew. There are other YouTube options for getting better acquainted with his work, and this one is longish (including a substantial – and to me fascinating – intro by someone else); but I like it for that reason, and also because it shows the text of each poem while he reads it.

I recommend that you check out both this YouTube reading and the New Yorker feature.


As for the poem I've shared, which is the final one in the book, I think it speaks for itself. I'll refrain from comment, except to say that it seems to me to refer not only to the Russia he once knew.

But of course, it doesn't even refer to that place/time literally, does it – let alone any other? Not only is it fictional; he calls it a fable.

Material shared here is presented for study and review. Poems, photos, and other writings and images remain the property of the copyright owners, usually the authors.