Wild Fridays #9: I Wish I'd Written This

I dreamed again you were alive, and woke
certain   it was your voice
love is whisky, it is milk,
it is water   don't ever, you said in the dream,
think I've gone

I woke a little more, a moment or two,
then remembered. Memory makes it so. Keeps you
under the trees.

I lay there a long time,
forgetting

By Anne Michaels
from All We Saw (London, Bloomsbury, 2017) 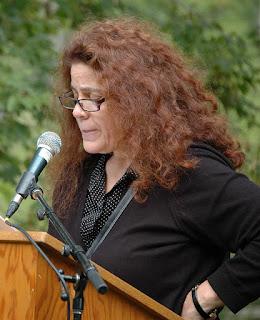 This poem came into my email inbox a couple of Aprils ago, courtesy of Knopf Poem A Day, which anyone can subscribe to in order to receive poems daily during April (which is poetry month in the USA and has become so by extension in many other parts of the world – at least online). It’s a nice thing to have happen … and this is one of a number of those poems which has stayed with me. Sometimes Knopf offers free downloadable broadsheets too (see below).

I have since discovered, via Wikipedia and other sources, that this Canadian poet is also an acclaimed, prize-winning fiction and non-fiction writer, best known for the novel Fugitive Pieces, which was made into a film.

It’s not very surprising I should be touched by this poem, and the simple beauty with which it unfolds. I was widowed seven and a half years ago – can’t believe so much time has passed already.  There are still no days when I don’t think of him, though by now more fondly than sorrowfully.

I know I’m blessed to have had a happy, loving marriage. That very thing probably makes the journey of grief harder at first.

I’m not the only one. Even just in the online poetry community (this and other branches of it to which I’ve found my way) there are people who have been through it, or are going through it right now: navigating the loss and grief, and working out how to make a life for themselves on their own.

Poems like this, from others who have made that journey, can help. We all make it alone, but some parts of each singular experience resemble each other’s, in mood if not in detail.

I never had that exact dream which Anne Michaels recounts, but I have had many others from which I woke in that same mood, and did as she describes, trying to hold on a while longer to the memory / the illusion.

Wonderful use of that final word, ‘forgetting’! For it is the reality, the now, which she allows herself to forget – for that while, and conscious all along, in the background, that that is what she’s doing ... choosing to do. 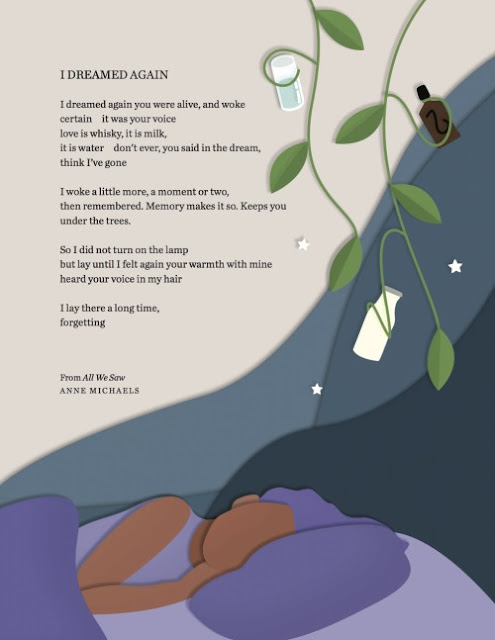 Material shared in this post is presented for study and review. Poems, photos, and other writings and images remain the property of the copyright owners, usually the authors.

This photograph of Anne Michaels by Dan Harasymchuk, taken at the Eden Mills Writers Festival 2013, is made available for free use under the Creative Commons licence CC BY-SA 4.0