A poem should be palpable and mute
As a globed fruit,

Dumb
As old medallions to the thumb,

A poem should be wordless
As the flight of birds.

A poem should be motionless in time
As the moon climbs,

Leaving, as the moon releases
Twig by twig the night-entangled trees,

Leaving, as the moon behind the winter leaves,
Memory by memory the mind—

A poem should be motionless in time
As the moon climbs.

A poem should be equal to:
Not true.

For all the history of grief
An empty doorway and a maple leaf.

For love
The leaning grasses and two lights above the sea—

A poem should not mean
But be. 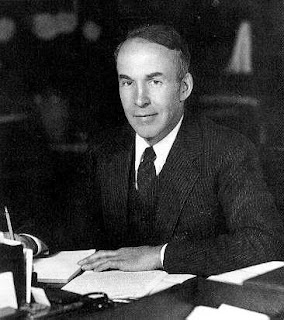 The last two lines of this famous poem are often quoted on their own – which in some contexts can make them sound pretentious and even meaningless (irony unintended).

The whole poem was recently referenced by a member of the Haiku on Friday facebook group. Looking at it again, I realised that, though one might very well take issue with it as regards poetry in general, it is a very apt prescription indeed for haiku: the immediacy, the grounding in sensual experience.

Its recommendations perfectly exemplify ’show, don’t tell’. But isn’t that what we’re advised to do with all our writing? So perhaps it is a good recipe for poetry in general, after all. Why, then, did I suggest one might take issue with that?

Oh, I think there are many valid ways to approach poetry. I've noticed that, just when someone seems to have formulated the definitive rules for writing excellent poetry, someone else will come along and break them – in brilliant poetry.

MacLeish himself later departed from the position he took in Ars Poetica. Wikipedia, in its comprehensive  account of his life and work, says,

MacLeish's early work was very traditionally modernist and accepted the contemporary modernist position holding that a poet was isolated from society. His most well-known poem, "Ars Poetica," contains a classic statement of the modernist aesthetic: "A poem should not mean / But be." He later broke with modernism's pure aesthetic. MacLeish himself was greatly involved in public life and came to believe that this was not only an appropriate but an inevitable role for a poet.

Best known as a poet, he was also a playwright and prose writer. His poetry won a number of awards, including the Pulitzer Prize three times and the French Legion of Honour. Wikipedia gives us further details of his distinguished career:

MacLeish studied English at Yale University and law at Harvard University. He enlisted in and saw action during the First World War and lived in Paris in the 1920s. On returning to the United States, he contributed to Henry Luce's magazine Fortune from 1929 to 1938. For five years MacLeish was Librarian of Congress, a post he accepted at the urging of President Franklin D. Roosevelt. From 1949 to 1962, he was Boylston Professor of Rhetoric and Oratory at Harvard University.

He instituted great, much-needed reforms at the Library of Congress and began the appointments which would grow into the position of Poet Laureate. As a former librarian myself, I particularly love what he had to say about books and libraries:

When he was seventy-four years old the Cretan novelist Nikos Kazantzakis began a book. He called it Report to Greco ... Kazantzakis thought of himself as a soldier reporting to his commanding officer on a mortal mission—his life. ...

Well, there is only one Report to Greco, but no true book ... was ever anything else than a report. ... A true book is a report upon the mystery of existence ... it speaks of the world, of our life in the world. Everything we have in the books on which our libraries are founded—Euclid's figures, Leonardo's notes, Newton's explanations, Cervantes' myth, Sappho's broken songs, the vast surge of Homer—everything is a report of one kind or another and the sum of all of them together is our little knowledge of our world and of ourselves. Call a book Das Kapital or The Voyage of the Beagle or Theory of Relativity or Alice in Wonderland or Moby-Dick, it is still what Kazantzakis called his book—it is still a "report" upon the "mystery of things."
But if this is what a book is ... then a library is an extraordinary thing. ...
The existence of a library is, in itself, an assertion. ... It asserts that ... all these different and dissimilar reports, these bits and pieces of experience, manuscripts in bottles, messages from long before, from deep within, from miles beyond, belonged together and might, if understood together, spell out the meaning which the mystery implies. ...
The library, almost alone of the great monuments of civilization, stands taller now than it ever did before. The city ... decays. The nation loses its grandeur ... The university is not always certain what it is. But the library remains: a silent and enduring affirmation that the great Reports still speak, and not alone but somehow all together ...

Meanwhile, I wonder what you think of his pronouncements in the poem I’ve shared. What do you feel poetry is, or should be?

If you decide to write your own ars poetica (a poem about poetry) please don’t link to it in the comments here, as that doesn’t work very well, but save it for a Sunday, when you can share it more effectively in Writers’ Pantry.

Material shared in 'The Living Dead' is presented for study and review. Poems, photos and other writings and images remain the property of the copyright owners, where applicable (older poems may be out of copyright).

This photo of Archibald MacLeish is in the Public Domain.
Posted by Rosemary Nissen-Wade at 12:30 AM