Dear Wordsmiths, the theme today is directly inspired by my present life situation. In recent weeks my home has been considerably rearranged, and bits of it pulled out, discarded and replaced.

I had a bad, and escalating, case of mould in my unit – which I hardly noticed because I lived with it, but which ended up causing severe respiratory problems. So the Housing Department, my landlord, has been de-moulding the place. Walls have been washed with special mould inhibitors, new vents put in under the eaves, and whirly things placed on the roof to extract moisture. And my flooring has been replaced.

They gave me new bedroom carpets a couple of weeks ago, and I replaced my beds and curtains. Already my breathing is very much improved.

Today, as I write, there is lots of loud noise around me, and I am keeping out of the way in the spare room as they do the floors in the passage and my main room (open plan lounge, dining-room and office). By tomorrow, when this posts, I’ll have photos to include of my nice new space.

The renewal is on many levels. The queen-size bed I shared with my late husband has been replaced by an almost-new king-size single. I got a mattress topper to make it super-comfortable. Now I wonder how I fitted a queen-size double bed into the same space, let alone all the furniture I had around it!

Except for occupying less space, the new bed is in the same place as the old one, so it’s not quite as if I’ve banished all memories of Andrew. Still, it’s like enjoying them from a new perspective – which seems fitting, as it’s already nearly nine years since I was widowed. 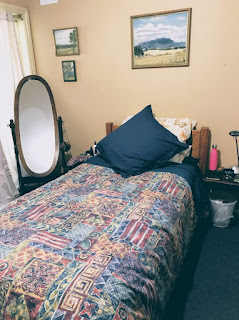 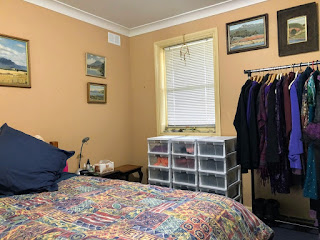 I’ve chucked out the old chip-board wardrobes which were riddled with mould, bought some deep drawers and reinstated a hanging rack which Andrew and I got when we first moved to this part of the world, to an earlier home also without built-ins. I look around now at my old-but-new bedroom – same pictures on the walls, same full-length mirror but in a different place, the familiar bookshelves now where the wardrobes used to be – and feel at once the safety of home and a sense that I am refreshed like the space.

The workmen were impressed today with how well I’d cleared the main room for them. The deal was that they would shift the furniture, but it had to be emptied first. I shifted some smaller furniture as well, incidental tables and the like. I’m impressed with myself, too – not bad for an 81-year-old with arthritis! I worked out the logistics in my head first, then made sure I had enough time to pace myself. And I did accept help offered by kind friends for shifting heavy stuff, such as the many books. But the thing is, only a few weeks ago my breathing would have been too weak for any such exertions!

In sorting the books and other belongings into temporary storage in the garage, I’ve already given a lot away to a sale a friend is planning, to raise money for one of our local charities. I anticipate a longer, slower restoration of what’s left back into the house, and a more leisurely culling of yet more items no longer essential to my happiness. It’s been forced upon me; it always seemed too overwhelming to start, until now. Now I find myself looking forward to a lighter, freer environment – and self! 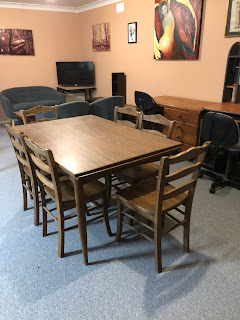 So today I invite you to write about change and renewal (either or both) and share the results at your blog via Mister Linky below. Just one entry per person, please; poetry or prose; prose no more than 369 words, excluding title. Apologies to those who started writing early: I added the 'either-or' option quite late, after Magaly's advance notice in the Writers' Pantry last Sunday had already gone out.

To clear up any confusion, particularly for newcomers, let me explain that for our Wednesday 'Weekly Scribblings' we prefer new pieces which you’ve written especially in response to our prompts – which we do put some thought into and try to make interesting and varied for you.

But what do you do if you’ve got something already written which fits the prompt?

We recently introduced a change, and started saying you could include ‘recent’ or ‘newish’ writings, and old ones extensively rewritten. It has become apparent that this is a bit too vague! So here is the renewed advice on this point:

1) If you wrote it in the last month (by date) we’ll accept it as ‘newish’ or ‘recent’ enough.

2) If it’s an older piece than that, which you have substantially rewritten (not just slight tweakings here and there) that’s OK too. If possible, please include in your post a link to the previous version.

3) On Sundays in the 'Writers’ Pantry', you can dish up anything you like, old or new, including pieces which address our Wednesday prompts no matter when they were written. It’s quite common for people who get inspired by a prompt a bit late for Wednesday to post it the following Sunday. You can also use the following Sunday (or any Sunday, really) for older pieces which happen to fit a prompt, and which you don’t want to rewrite.

That’s it. Have fun!