We haven’t gone in for form prompts very much in this community, but I like them. If ever I'm stuck with my writing, I find turning to form usually helps, so it's handy to have a few under my belt to choose from.

So I’ll be giving you some form prompts now and again, just because I can.  If you can't stand them, don't worry – I’ll make sure to include a different option for you.

Meanwhile – what’s the difference between found poems and erasures? Aren’t they the same thing?

Well I guess it’s fair to say that all erasures are found poems but not all found poems are erasures. (This may not be new information to you, but in case it is for some, please bear with me.)

In fact, found poetry is not so much a form as a method. It can take any form, as you'll see. But though it may look like free verse (unless it doesn't) it is arrived at differently. There are two main methods.

A found poem is a set of words you find somewhere, not originally intended as a poem, but in which you see or ‘find’ the poem that hides there. With the non-erasure kind, the words will be close together, the poem discoverable in the particular sequence.

With this kind of poem, you must acknowledge the source. (It can often – though not necessarily – be a literary text.) Your own authorship lies in spotting the unintended poem in the first place and then arranging it into lines of verse. You might also make small changes to punctuation and even smaller ones to word order. The crux of it is in what you leave out. You take away the background, so as to reveal the poem.

In this case you don’t need to erase the surrounding words; you simply extract the ones you choose, copying just those without all the others. I sometimes mine my own writings – old journal entries, or those poem drafts that never quite worked.

You can even find a poem in something someone says aloud. (Then you have to make sure to jot it down while you still remember it.)

There’s a facebook group called Found Haiku, where all the haiku are made by this method. However, found poems can take any form that works.

This is the kind of found poem I love to play with.  Here are the first I ever found – and yes, they are haiku:

from The Snow Leopard by Peter Matthiessen (Harvill ed., 1996)

The deep muttering
of Boulders in Black River –
why am I uneasy?

Sunrays glance from snow,
black choughs dance over the void,
I pay attention.

An erasure – a form made famous by Austin Kleon’s ‘blackout poems’ from newspapers – is when you actively erase printed words (blacking them out, whiting them out, or even using colour). The words you leave un-erased make the poem. It’s recommended that you look through a text, draw a box around words you want to keep and then use a marker to obliterate all the others.

In this kind of found poem the words may be very far apart on the page before your mind sees connections. It’s more arbitrary than the other method, and you have much more authorial control, because this time it’s not just a matter of coming across words which already work beautifully together, but of selecting the words in such a way that you make them work. The possibilities in one page of text could be many and varied.

This is not a method I’ve had a lot of success with, but our Magaly is brilliant at it, as you’ve no doubt observed from time to time, and so is J.I. Kleinberg whom I’ve featured here in the past. They take the basic method in their own directions. I asked them both to explain, for this post, how they go about it.

Here’s my email exchange with Magaly:

I'm always intrigued by your erasure poems. I'd love it if you could tell me how you find the raw material, the sources of the words.

My raw material is usually damaged books. But, in the past, I've also created blackouts from books gifted to me by authors who wished me to make blackouts from their words.

Do you use just any old random piece of print, or do you look for things which seem interesting in themselves and/or on topic.

Or do you not have a topic in mind when you begin, but let that be guided by the source material (and your unconscious)?

Sometimes, I pick a page and let the muse go wild. Other times, I grab a page with a topic in mind, and let the words guide the muse.

When I asked her about the damaged books, she explained they are old library books being thrown out.

Then, as you’ll have observed, she sometimes turns them into new art objects by means of stitching, and/or expands on them to create a new text. Have a look at her blog post here, where it's well worth following her own link to see step-by-step photos of her stitched blackout process. Quite fascinating!

And here is one that became expanded.

Judy (publishing as J.I. at her blog, chocolate is a verb) – who  has made a veritable career of erasures, though also being a visual artist as well – went into even more detail. I was interested to find she uses discarded library materials too (though not books).  I asked her the same questions as Magaly. And I added:

Then, what dictates the way you present them? Is that where the words would have been in relation to each other in the original? And how do you arrive at the green background? It looks as if the words are placed on it, but maybe you impose it around them.

Because this actually makes more sense when you see it, I'm attaching a few images by way of illustration: 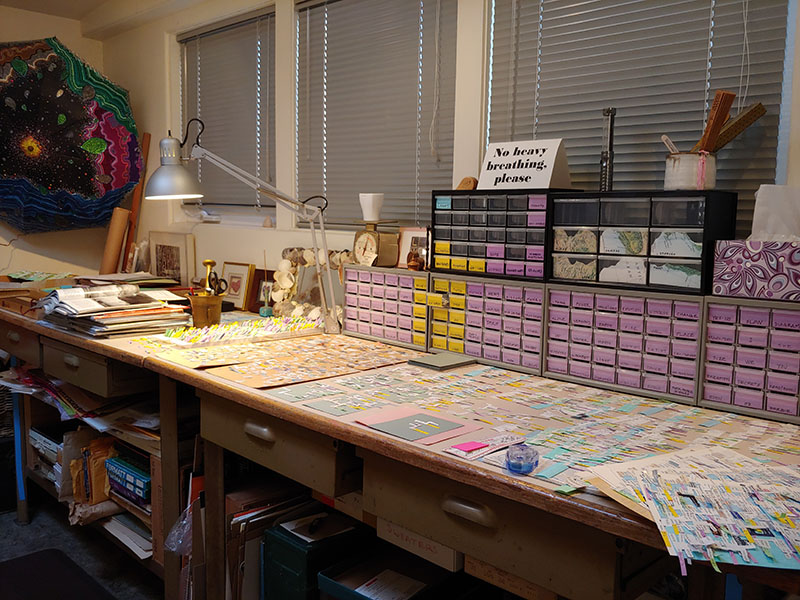 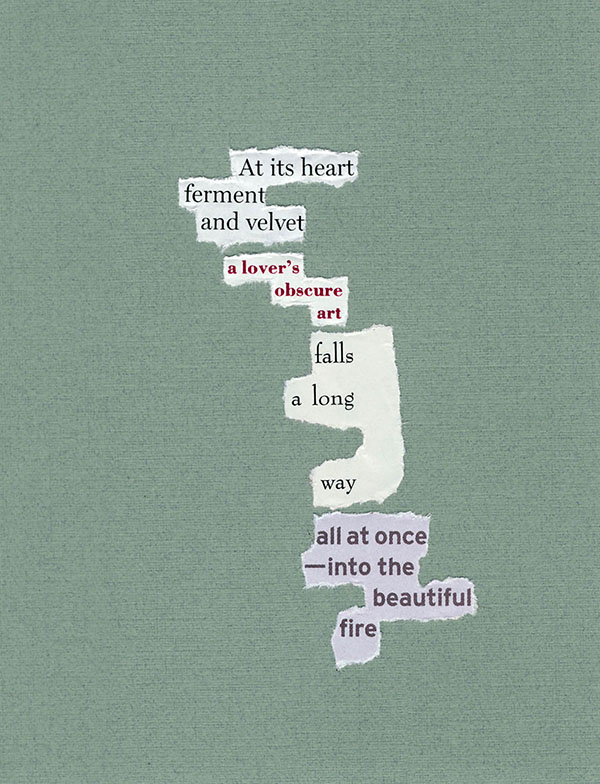 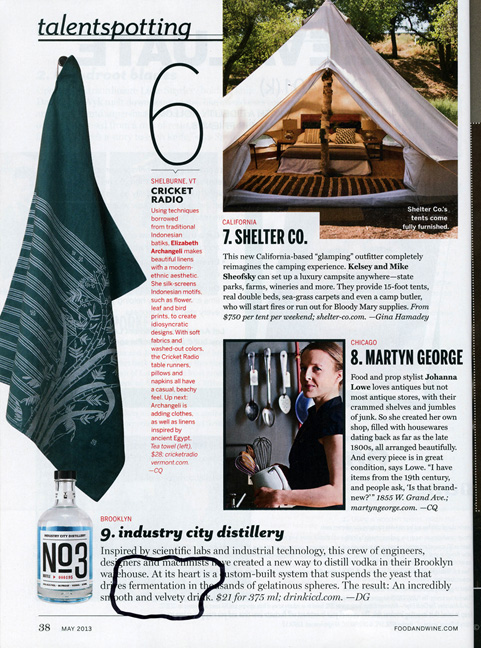 I work strictly with magazines -- no books, no newspapers, no direct mail, though of course those are all legitimate sources. I NEVER use other people's poetry.

My magazines come from the 'free' bin at the local library, which I miss acutely since the library is still closed.

Over time, I've found that some magazines are better resources and some are definitely not. No magazine is off limits, but what I'm looking for is interesting language and there are a lot of magazines that have a sort of cheerful, dumbed-down voice that is pretty useless.

At any given time, I might have 20 to 50 poems started (that's what's scattered all over the table), i.e., I've found some blocks of words that seem to resonate with one another but haven't found the final pieces that will bring it all together. So, as I'm looking for words, I have those beginnings somewhere in my consciousness, but I never set out to find specific words to fit -- that simply doesn't work. Sometimes I find that ah-ha piece, but more often I find something new that suddenly makes me think of other words I've already harvested and then a poem comes together.

What I'm looking for is NOT other people's gorgeous lines and language, but places where, through the accident of magazine-page design, words stack up unexpectedly to create new meaning. (You can see that in the magazine page I've attached.) The found words must be entirely removed from their original sense and syntax, leaving no attributable phrases.

When I started this crazy thing nearly ten years ago, I pasted the first few onto this green paper stock, a letter-size sheet cut into quarters, and I've stuck with that paper and size, which sort of dictates the length of the poems. When I find the 3 or 4 or 5 fragments that will go together, I often do a lot of shuffling to find the order I want them in, but what I'm looking for is a visual cascade, where each contiguous block of text is roughly the equivalent of a poetic line and the cascade sort of shows you how to read the poem.

The finished poems are scanned at high resolution, and what you see online is a low-resolution version, cropped to eliminate a lot of the extra green.

Many thanks to Magaly and Judy for so generously sharing their fascinating processes. I'm in awe of their artistry and patience! You can find more of their work on Bloglovin' and on Instagram.

And now, dear wordsmiths, I offer you the chance to try some brand-new (though the source can be as old as you like) found poetry of your own – which might or might not be an erasure poem; that’s up to you.

Or, if that doesn’t grab you, you may write (in any form you like) on the subject of finding or losing, or about erasing something. If it’s prose you like, please keep it within 369 words excluding title.

Some prose writers 'find' their stories by using newspaper headlines or whole articles as sources of inspiration. You may do that too if you wish. If so, please tell us your source.

Drop your links in the slot below, maybe say G’day (or anything else on your mind) in a comment, and enjoy each other’s writings!


Material shared here is presented for study and review. Poems, photos, and other writings and images remain the property of the copyright owners, usually the authors. (Older material may be out of copyright).