The pungent smells of a California winter,
Grayness and rosiness, an almost transparent full moon.
I add logs to the fire, I drink and I ponder.

He was the youngest in our group. I patronized him slightly,
Just as I patronized others for their inferior minds
Though they had many virtues I couldn’t touch.

And so I am here, approaching the end
Of the century and of my life. Proud of my strength
Yet embarrassed by the clearness of the view.

Avant-gardes mixed with blood.
The ashes of inconceivable arts.
An omnium-gatherum of chaos.

I passed judgment on that. Though marked myself.
This hasn’t been the age for the righteous and the decent.
I know what it means to beget monsters
And to recognize in them myself.

You, moon, You, Aleksander, fire of cedar logs.
Waters close over us, a name lasts but an instant.
Not important whether the generations hold us in memory.
Great was that chase with the hounds for the unattainable meaning of the world.

And now I am ready to keep running
When the sun rises beyond the borderlands of death.

I already see mountain ridges in the heavenly forest
Where, beyond every essence, a new essence waits.

You, music of my late years, I am called
By a sound and a color which are more and more perfect.

Do not die out, fire. Enter my dreams, love.
Be young forever, seasons of the earth.


I'm in the middle of reading this book at present, a recent purchase.  It's a wonderfully full volume in both length and content. These poems deserve some pondering (to use his own word). Seamus Heaney, another great 20th Century poet, says in his foreword, 'From start to finish, merciless analytic power coexisted with helpless sensuous relish.'

Milosz witnessed and survived German Naziism and the early days of Russian Communism. And he lived long enough to be aware of humanity's environmental destructiveness. Some of his poems are understandably bleak (despite his strong Catholic faith). Others, however, display that 'sensuous relish' Heaney mentions. I chose this one partly because it is so positive and so visionary, partly because of what it suggests about being a poet. 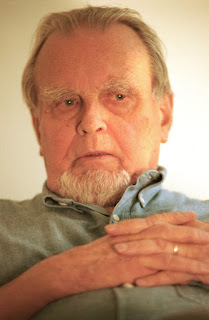 Czeslaw Milosz ... was a Polish-American poet, prose writer, translator, and diplomat. Regarded as one of the great poets of the 20th century, he won the 1980 Nobel Prize in Literature. In its citation, the Swedish Academy called Miłosz a writer who "voices man's exposed condition in a world of severe conflicts".
Miłosz survived the German occupation of Warsaw during World War II and became a cultural attaché for the Polish government during the postwar period. When communist authorities threatened his safety, he defected to France and ultimately chose exile in the United States, where he became a professor at the University of California, Berkeley. His poetry—particularly about his wartime experience—and his appraisal of Stalinism in a prose book, The Captive Mind, brought him renown as a leading émigré artist and intellectual.
Throughout his life and work, Miłosz tackled questions of morality, politics, history, and faith. As a translator, he introduced Western works to a Polish audience, and as a scholar and editor, he championed a greater awareness of Slavic literature in the West. Faith played a role in his work as he explored his Catholicism and personal experience.
Miłosz died in Kraków, Poland, in 2004. He is interred in Skałka, a church known in Poland as a place of honor for distinguished Poles.

The article expands to a lot more detail about his life and work. If you'd like the extra information, click this link.

Meanwhile here is Jane Hirshfield reading the poem, after which she gives a very interesting analysis of it. Yes, I know we all hated the way poems were pulled apart at school. This is on a different level, being for adult students, and is done with great respect and love for the poem as well as deep understanding.


Material shared in 'The Living Dead' is presented for study and review. Poems, photos and other writings and images remain the property of the copyright owners, where applicable (older poems may be out of copyright).

This photo of Czeslaw Milosz is by Artur Pawlowski, made available under Creative Commons licence CC BY-SA 4.0