Hello  again, dear Wordsmiths. How are you surviving the weather, the pandemic, the politics? Escaping into books (if only temporarily) is one of my strategies.

Lately I’ve been reading Tim Winton – such a beautiful writer! 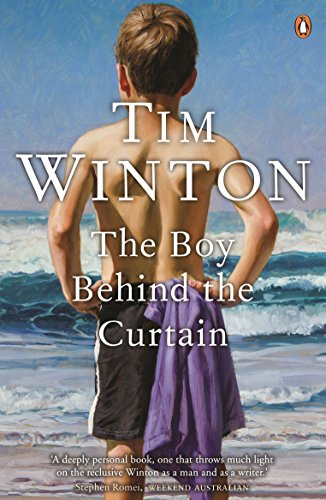 This time it’s not one of his brilliant novels, but The Boy Behind the Curtain, a collection of autobiographical stories which the blurb describes as ‘a powerful evocation of those charged moments that make up a life’. It further describes these moments as, ‘joyous, traumatic and transformational.’ In the early part of the book, which is where I am, they are moments of accident and havoc.

Winton himself says, in the book, that he has been ‘a chronicler of sudden moments … the abrupt and the headlong’. Certainty, he suggests, is an illusion, yet we have come to expect it. He tells of an editor rejecting one of his stories on the grounds that 'the shark attack came out of nowhere' – as if that were 'so unlikely as to seem improper'.

The book was written in 2016. By now we have been reminded en masse that life is not as predictable as it may seem.

On the other hand, we can get a sixth sense. He mentions also the 'sudden, skin-prickling proximity to havoc’ in situations of danger, whereby ‘sometimes its arrival is no real surprise at all … If you’re attuned, you can see things coming unstuck before it starts to happen, and it’s an eerie feeling.’

At this point he’s talking about catastrophic events, but the same prescience might also apply to the joyously serendipitous.

I would love to read what you have to say about sudden events which people somehow sensed coming – and also those which they didn’t. Whether traumatic or joyous, your own or someone else’s, real or fictional – that’s up to you.

New or newish writing, please, or old stuff considerably reworked; one per person; verse or prose, with prose capped at 369 words. Link us to your post via Mister Linky below; and leave us a few words here, too, if you will.

On Sunday Magaly will host our next Writers' Pantry, on the first day of August. Goodness, how did we get here so fast?