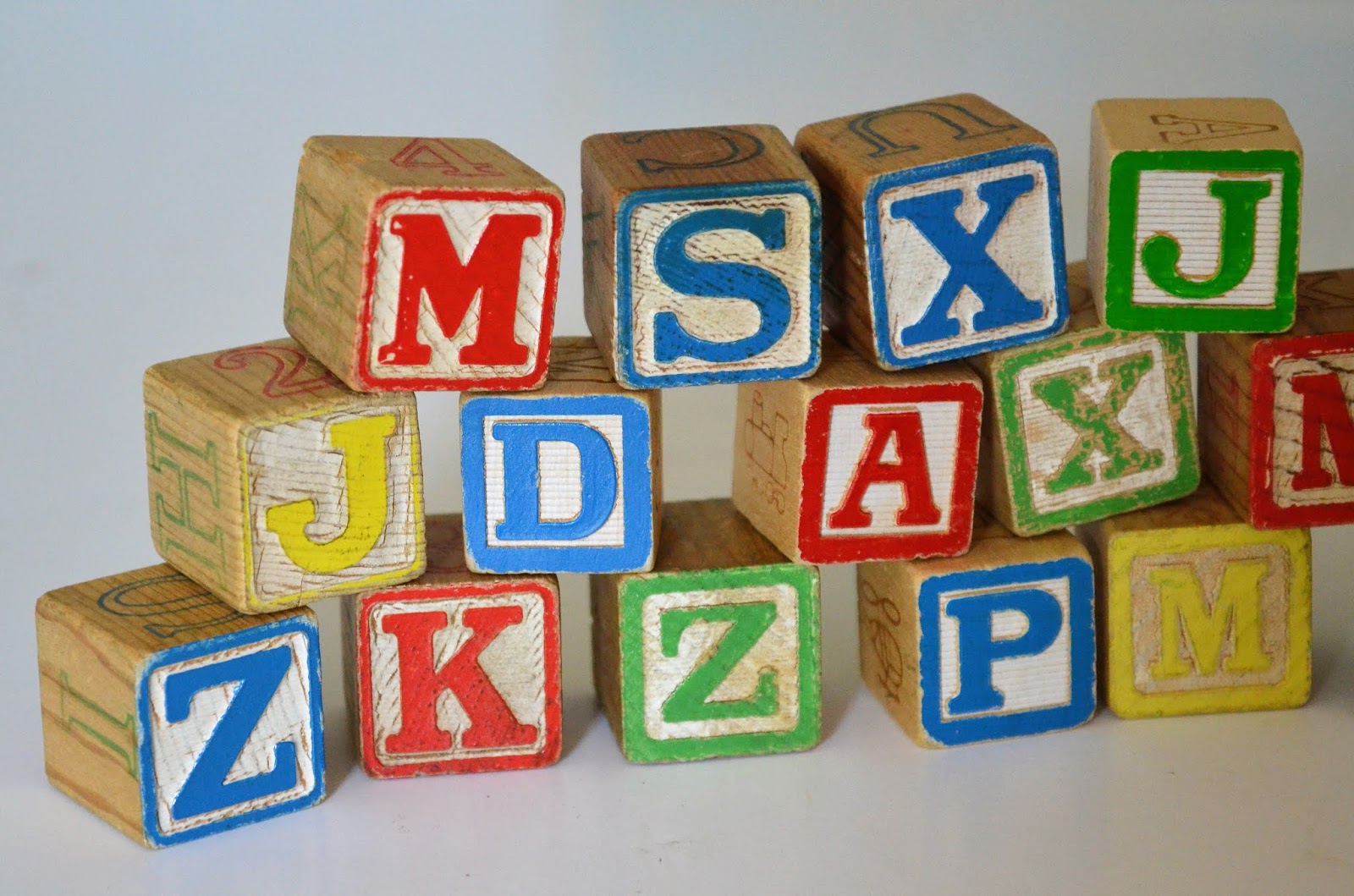 We’ve been focusing on the words recently: our love of them, the fact that they are our basic tools, and particular new ones coming into currency.

Letters are the building blocks of words. In fact I first learned my letters, as a pre-schooler, from a set of wooden alphabet blocks my parents got me. I had an affinity for letters from the start (unlike numbers!) and delighted in the magic of being able to put them together to make sounds and words. But that’s not all one can do!

It can be an interesting exercise to try leaving out one letter from a piece of writing – very tricky if it’s E, the most frequently used letter in English. [That exercise came from Australian author Kate Grenville’s The Writing Book: A Workbook for Fiction Writers (Sydney, Allen & Unwin, 1990). I can’t recall where I found the following exercises.]

It can also be interesting to see what happens if you decide to use one particular letter repeatedly in a piece of writing. Of course, most letters are used many times in a piece of writing, but I mean purposefully working a particular one in as often as possible.  Here is what happened for me when I tried this with the letter M, many years ago, in a prose-poem. (In fact I shared it with Poets and Storytellers early this year.) It was most felicitous!

Some of my favourites of my own poems came from an exercise to choose a vowel and write a 10-line poem, using a word with that vowel in every second line. I immediately got it wrong and used my chosen vowel in every line, but decided to leave it that way. That poem became the first of a series using this method, in the course of which I varied the number of lines in some poems, varied which lines got my vowel words, used both the long and short versions of each vowel (in different poems) and when I ran out of vowels turned to diphthongs and r-controlled vowels (e.g. boy, fur).

I didn’t go through the alphabet in any particular order; didn’t start with ‘a’ for instance – though one could. It was fairly random, as the whim took me, except I made sure I used every vowel in both long and short versions, and then every diphthong and r-controlled vowel sound, before I finished the series. It was fun.

[Some of you read the series, but I didn't at the time disclose this technique, and no-one picked it up. To tell the truth, I don’t think these open-mouthed sounds have as much effect on the mood of a poem or story as using a particular consonant does.]

So, what could you do with one single letter used over and over in one piece of writing? (Don’t panic, I won’t ask you to write a whole series right this minute!)

I invite you to use one letter multiple times in a piece of writing, whether poetry or prose. The choice of letter is up to you, as is the subject matter. If you choose prose, please keep it to the upper limit of 369 words (excluding title). If you choose a vowel, think about whether you want to use all the sounds it can make or just one, e.g. 'home', 'drop' and 'come' in the same piece of writing, or only the long  O: 'home', 'bone' and 'mope'.  (Or only the short one: 'drop', 'stop', 'shop', etc.)

Have fun, leave us a comment here if you’d like to, and enjoy each other’s responses to the prompt, which are sure to be fascinating in their variety.  The prompt will stay open a week.